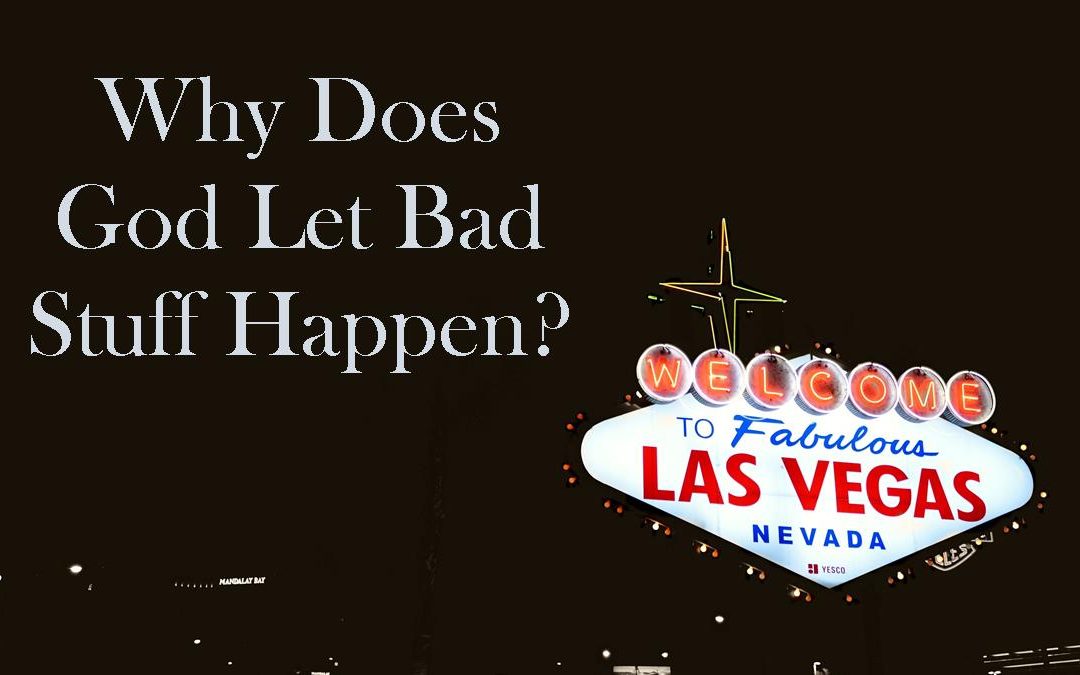 On the heels of the worst mass shooting in US history, terrorist attacks going on worldwide, earthquakes in Mexico, and a record-breaking hurricane season, it kinda begs the question.

Why does God let bad stuff happen? I mean, He could stop it, right? So why?

It’s a legitimate question, a question that’s been asked for millennia. Truth is, man-made calamities and natural disasters have been going on throughout history, including in Jesus’ day. So I thought we’d take a look at Jesus’ response to massacres and disasters in Luke 13.

First, let me give you the context. In Luke 12, Jesus was preaching to thousands of people, warning them of things to come. Bad things. There would be famines and earthquakes. People would be divided. Some would be killed for their faith. Others would abandon the faith. People will steal from you and nature itself will destroy material things the world deems precious.

And in the midst of all that bad news, Jesus basically says two things:

Don’t be afraid. Do be ready.

Over and over again throughout this sermon, Jesus says don’t worry, don’t be afraid, even in the face of death. Instead, be ready. Live ready. Don’t get all caught up with the things of this world that perish and fade. Instead devote yourselves to God’s Kingdom. Instead of hoarding wealth, give generously to the poor. Instead of taking care of yourself, serve others. Don’t focus on here and now, focus on eternity, the future future. That’s how he describes being ready.

He finishes in chapter 12 reminding us that we’ll all face judgment one day. As he finishes his talk, several people in the crowd bring up current events, a terrible tragedy brought on by human evil. Pilate had slaughtered a group of Galilean worshipers in the temple, “mingling their blood with their sacrifices.” It was incredibly heinous and cruel considering the Temple should be the one place people are safe.

And they all had the same question: Why did God let that happen? Based on Jesus’ response, it seems they were wondering if that was God’s judgment on “those” people.

Now it seems to me that this would be the ideal time for Jesus to say definitely, once-and-for-all why God allows really bad things to happen. But he doesn’t. He doesn’t deal with “the why” at all. Instead he says, “Do you think that these Galileans were worse sinners than all the other Galileans because they suffered this way? I tell you, no! But unless you repent, you too will all perish.” (Luke 13:2-4, NIV)

In other words, don’t be looking at others, wondering if they got theirs, if God was judging them for their sins. Jesus says we’re all in the same boat, sinners, none better or worse than others. And one day we’ll all face judgment.

Then he brings up another current event, a natural disaster this time. The southeastern tower of the wall in Jerusalem had toppled over, likely due to an earthquake, killing 18 people. And he’d heard all the talk on the street about God’s judgment on those folks.  So he says again, “Do you think they were more guilty than all the others living in Jerusalem? I tell you, no! But unless you repent, you too will all perish.” (Luke 13:4-5, NIV)

In response to both tragedies, man-made and natural, instead of answering questions about “why” it happened, he tells them “what” to do.

Repent literally means to “re-think.” Jesus says human tragedy and death should provoke a re-thinking of our own lives. Yes, we should grieve and mourn the loss of life, the shattered families, the broken dreams. But we should also take a long look at our own lives.

In the midst of all the pain and suffering going on around us, let’s take time to re-think our lives. Let’s be willing to make necessary changes, and courageously follow the way of Christ.

For the next several weeks, I’m going to be blogging about hope! With all of the recent tragedies and natural disasters, people are looking for God more than ever. They’re looking for some kind of hope in the midst of pain, and suffering, and death. This is the reason I wrote the book, Desperate For Hope. In it, I deal with the tough questions about why bad things happen to good people. I don’t give pat answers. I do share hard truth. But I also offer hope. Hope in God, hope in his justice and goodness. All of us know people who are struggling with pain and loss and heartbreak right now. Wondering where God is in all of this suffering, wondering if he cares. I truly believe this book can help them.

You can order it now at: http://desperateforhope.com. All of the proceeds from the sales of Desperate For Hope will go to mission work serving the least of these. Thanks so much for your investment in the lives of others!