Hope When You’re In The Perfect Storm 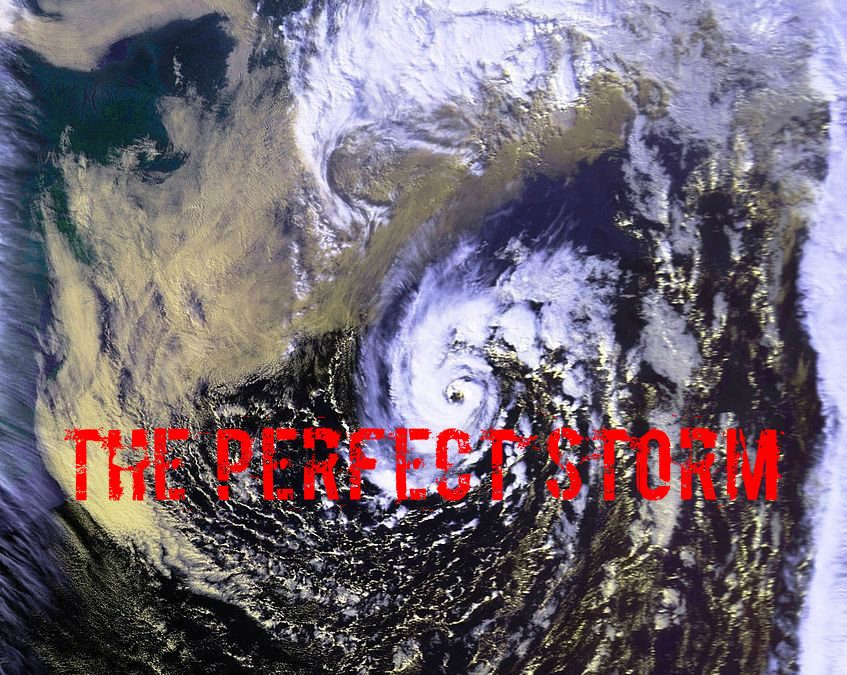 Hope When You’re in The Perfect Storm

This month marks the end of a catastrophic hurricane season, both in sheer numbers (16 already) and storm intensity. The hurricane season officially ends on November 30th, but it’s already been the most destructive on record with over 317 billion in damages and counting. This week also marks the anniversary of The Perfect Storm which lasted from Oct. 28-Nov. 2, 1991.

I’ve long been fascinated by the true story of this storm as told in the best-selling book The Perfect Storm by Sebastian Junger. My first introduction to it was the blockbuster movie with the same name, and I bought the book later. It’s the fateful story of the crew of the fishing boat, Andrea Gail, and their final voyage on the high seas.

In fall 1991, Captain Billy Tyne gathered a group of fishermen around him and headed out to sea for a late-season sword-fishing catch. While at sea, a series of storms gathered and collided over the eastern seaboard of the United States, creating a cataclysmic weather dubbed by the National Weather Service as “The Perfect Storm.”

This was a highly unusual kind of storm because of the way it formed. It was really three storms in one. It all started with a hurricane, that was absorbed by a cold front over New England, that finally collided with a low-pressure system to the north. The bizarre combination of these three storms formed one massive storm that exploded over the New England states. The damage? In the hundreds of millions, with 13 counties declared federal disaster areas.

And the six fishermen aboard the Andrea Gail never returned.

I’ve also been fascinated by another true story that mirrors this one. A guy named Matthew tells it in the best-selling book, the Bible. Turns out, he was an eyewitness to the event. Somewhere around 30 AD, a captain by the name of Jesus gathered a group of men around him and led them out to sea, determined to take them to a new place. And he led them straight into the heart of a storm. They never returned…not the same anyway.

It goes like this. “When Jesus saw the crowd around him, he gave orders to cross to the other side of the lake. Then he got into the boat and his disciples followed him. Without warning, a furious storm came up on the lake, so that the waves swept over the boat. But Jesus was sleeping. The disciples went and woke him, saying, “Lord, save us! We’re going to drown!” (Matthew 8:18, 23–25, NIV).

Great story huh? It’s amazing how many times I’ve read that story (and the parallel versions of it in the other Gospels) and have missed a lot of really important stuff. Probably because I was more interested in the end of the story—you know, where Jesus miraculously calms the storm and everything is hunky-dory again. I think that’s just human nature. Skip to the end. Just get me to the other side of the storm. Tell me the happy ending. I want to know how it all works out. And as a result, I miss much of what God wants to teach me in the process.

There are several mildly disturbing things about this story that I need to point out for us before we move on.

Okay, for starters, who led them into the storm? Scripture says that Jesus gave the order for everyone to follow him into the boat. So Jesus, God incarnate, led them right into the storm. And apparently didn’t bother to mention anything about said storm. “Without warning, a furious storm came up…” Now I’m thinking it would have been nice for God to at least let them know a storm brewed over the sea. Better yet, how ’bout we not take the boat at all? We could always take the long way and walk around. But no, Jesus led them right into the heart of a furious storm so violent it convinced even seasoned fishermen that they were going to die.

In my experience, the worst storms that come into our lives generally come without warning too. A loved one receives a cancer diagnosis. We lose our jobs, sometimes through no fault of our own. We find out we can’t get pregnant. We find out that our teenage daughter is pregnant. A good friend betrays us. Or perhaps worst of all, death snatches a child or a spouse. And in a moment, our lives reel out of control.

But that isn’t the most disturbing thing to me in the story. Not by a long shot. It’s the whole “But Jesus was sleeping” thing. I find that highly disturbing. Even wrong. How do you sleep through a storm like that? Particularly when you’ve got the power to stop it!

Have you ever felt that way? That you were (or are) going through the worst storm of your life, and it’s like God’s asleep? Why doesn’t He do something? Why doesn’t He stop it? Can’t He see that I’m in pain? I have. And here’s what I am learning about God.

God’s more intent on perfecting us through trouble, than on protecting us from trouble.

A passage in Scripture that inspired my book, Desperate For Hope, is found in James 1:2–4. “Consider it all joy, my brethren, when you encounter various trials, knowing that the testing of your faith produces endurance. And let endurance have its perfect result, that you may be perfect and complete, lacking in nothing” (NAS).

Here’s the Bruce paraphrase on that: “As a child of God, you can have joy when you experience major storms in life because you know a secret! Every time you endure a storm, your faith is being strengthened and God is making you perfect, just like Jesus Christ” (MBT – Modern Bruce Translation).

God’s intent on making us perfect. Not just good…perfect. God’s not as interested in making our lives pleasant as He is in making them perfect. This may not be exactly what you wanted to hear, but it’s true nonetheless.

1 Peter 5:10 reminds us, “And the God of all grace, who called you to his eternal glory in Christ, after you have suffered a little while, will himself restore you and make you strong, firm and steadfast” (NIV).

Peter points us to the reality that there will be an end to our storm “after you have suffered a little while.” To be honest, that’s not real encouraging to me. After all, a thousand years is like a day to God. How long might “a little while” be? I can’t tell you. I don’t know. But God does. And He’ll use the storm to make you perfect. By the way, did you notice that Peter refers to God as “the God of all grace” in that passage? It’s a little disquieting to me to think that a gracious God would allow me to suffer for any length of time. I thought grace was a good thing. When I think of “the God of all grace,” I’m thinking “the God of all comfort” or “the God of all peace,” not so much “the God that allows suffering.”

But in a way that I don’t understand fully, it’s the grace of God that not only allows suffering, but sometimes even initiates it.

Here’s a little trivia that you probably don’t know about the storm of the century. Do you recall what actually started “The Perfect Storm” in October 1991? As I mentioned earlier, the collision of three storms caused that storm, but it was a hurricane that formed in the Atlantic Ocean that initiated it. You want to take a wild guess at the name of that hurricane?

Seriously. I’m not making this up. Hurricane Grace. Ironic isn’t it? “The Perfect Storm,” the storm of the century was initiated by Grace. In the same way, it’s the grace of God that allows, or even brings storms in our life. Remember, God is more intent on perfecting us though storms than protecting us from storms. There’s a temptation to think that once we’ve experienced the grace of God in our life, the worst of our troubles are behind us. That once we make the decision to follow Jesus Christ, he will only lead us “beside the still waters.” But this wasn’t the case with the first followers of Jesus Christ, nor will it be for us. There are certain things that we can only learn by going through storms and since God’s intent on perfecting us, he’ll insist that we experience them.

Here’s what I love about that storm story from Matthew 8. Jesus hung with them—before the storm, in the storm, and after the storm. It reminds me of the final words of Jesus before He ascended into Heaven and turned the whole thing over to us: “Surely I am with you always, even unto the end of the world.” We often miss the amazing comfort and strength found in those words. Our prayers reflect that we’re more interested in God’s presents than in His presence. I know mine do.

But the older I get, and the more storms I endure, the more I realize the incredible importance of the truth that God is always with me. No matter what. And that’s enough.

So here’s hope when you’re in the middle of the perfect storm. You’re not alone. God is with you. And in ways that you can’t see or understand now, he’ll use this storm to make you perfect.