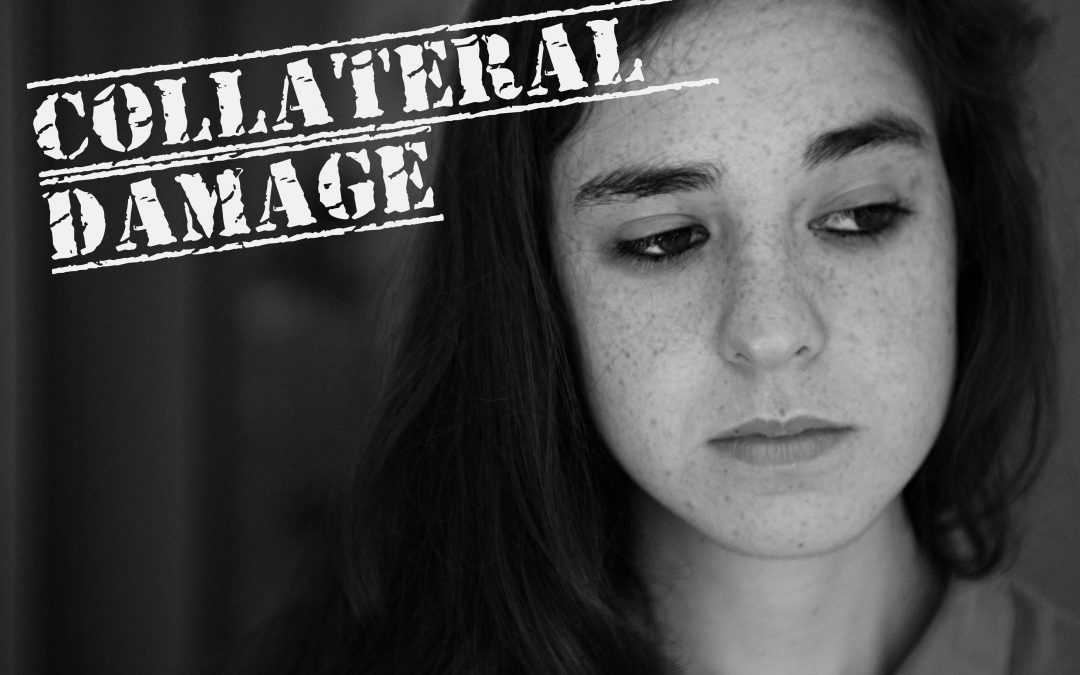 One of the first things we focus on when something bad happens is ourselves. “What did I do to deserve this?” And more often than not, the answer is “nothing.” You didn’t do anything wrong. Someone else did. Which is the next most obvious reason that bad things happen to good people.

Someone else made a bad call and now you’re experiencing the collateral damage.

This is a tough pill to swallow, but sometimes you are enduring a storm someone else stirred up. You just happened to be in close enough proximity to them that their storm became yours. This could be a spouse, a co-worker, a boss, a parent, a child, a sibling, etc. Someone else blew it, and now you’re reaping the consequences of their sin.

Collateral damage. Someone else sins, but you’re reaping the consequences.

In this situation, many succumb to bitterness because of the unfairness factor. Why should my life have to be destroyed because of what someone else did? Why didn’t God prevent this from happening? Or at least, why didn’t God protect me from the consequences?

One of the reasons that we have to take sin seriously is because of the collateral damage it wreaks for others. As much as I hate to admit it, some of my bad decisions have caused major problems for others. My sin wounded people I cared about, including my wife, my family and the church where I served. It would be almost impossible to live with except for the fact that I knew something from the “not so obvious” category of why bad things happen to good people.

God’s preparing you for something.

God’s always up to something. Write that down. Memorize that statement. —It’s one of the more profound truths in the Bible. Jesus put it this way in John 5:17, “My Father is always at his work to this very day, and I, too, am working.”(NIV)  God’s always at work, always up to something. And because He’s good, that something will always be good. No matter how bad the storm is and no matter who caused it, God’s at work behind the scenes.

The story of Joseph in the Old Testament fits this category well. Joseph was a young man with some incredible dreams for his life. His dad was particularly fond of him and made a significant investment in his wardrobe. He looked good and so did his future. His whole life stretched out before him, beckoning him to greatness.

But a storm was brewing. The rest of the fam didn’t appreciate his dreams—particularly his brothers. As a result of their jealousy, they made a series of bad decisions, starting with throwing Joseph into a pit and leaving him for dead.

But the oldest brother starts feeling a little bad about the whole thing, so he talks the rest of them into selling their younger brother into slavery.

Slightly better than left for dead, but not much.

However, while in slavery, Joseph makes the best out of a bad situation, and kinda works his way up to head slave, managing all of the household of his master, a guy named Potiphar. Again, not exactly what he’d dreamed about as a young man, but better than most slaves experience.

But then a second storm rolled in. Potiphar’s wife has a “desperate housewives” moment and tries to seduce Joseph into sleeping with her. Joseph says “no” multiple times and finally flees the house. To protect herself, Potiphar’s wife concocts a story claiming that Joseph was trying to take advantage of her. Understandably, this doesn’t sit real well with Potiphar, so he has him thrown into prison. As the result of another person’s sin, Potiphar’s wife in this case, Joseph winds up in prison.

For doing the right thing.

He hadn’t done anything wrong; he was simply reaping the whirlwind of other people’s bad decisions. Kind of redefines the meaning of collateral damage. But even after helping other prisoners gain their freedom during his time in prison, he’s forgotten, left for dead, rotting in a lonely prison cell.

Pretty much back to square one when he was left for dead in the pit. Don’t you know he had some questions? Where is God in all of this? Why do bad things keep happening to me? I mean, I’m trying to do the right thing here. I’m actually avoiding sin and my life is getting progressively worse! Talk about some serious collateral damage.

But God’s always up to something.

Skillfully weaving all of these bad things together—kidnapping, slavery, false accusations, and prison–He brought about ultimate good for Joseph, his family, and millions of others. In an incredible turn of events, that only God could orchestrate, He positioned Joseph as the second highest ranking leader in the nation.

So what’s Joseph’s take on his “collateral damage?”

When God gave him an opportunity to confront the people who caused all the misery in his life, he said this: “And now, do not be distressed and do not be angry with yourselves for selling me here, because it was to save lives that God sent me ahead of you…God sent me ahead of you to preserve for you a remnant on earth and to save your lives by a great deliverance. So then, it was not you who sent me here, but God…You intended to harm me, but God intended it for good to accomplish what is now being done, the saving of many lives” (Genesis 45:5–8; 50:20, NIV).

Later in his life, Joseph perceived the “not so obvious” reason for his storms—“a great deliverance…the saving of many lives.” Interestingly enough, he credited God with the whole shebang!

This probably wasn’t Joseph’s take during the middle of his troubles. I imagine Joseph is a lot like you and me, crying out to God, “Why the pit, why the slavery, why the prison term?” And I don’t think he got an answer. Not then. Only after the storm passed could he see the hand of God. God was preparing him for something great. But it took collateral damage to get him to that point.

Maybe you’re in a storm someone else caused. In fact, it may be going a lot worse for you than it is for the person who made the bad decision. Don’t allow yourself to become bitter. Forgive the person who caused the storm and know this: God’s up to something! And He’s preparing you for something. Something that will help others.

So here’s hope when you’re experiencing collateral damage: God is preparing you, for what He is preparing for you.

He’s preparing you for greatness! Believe it.

Photo by Pablo Varela on Unsplash