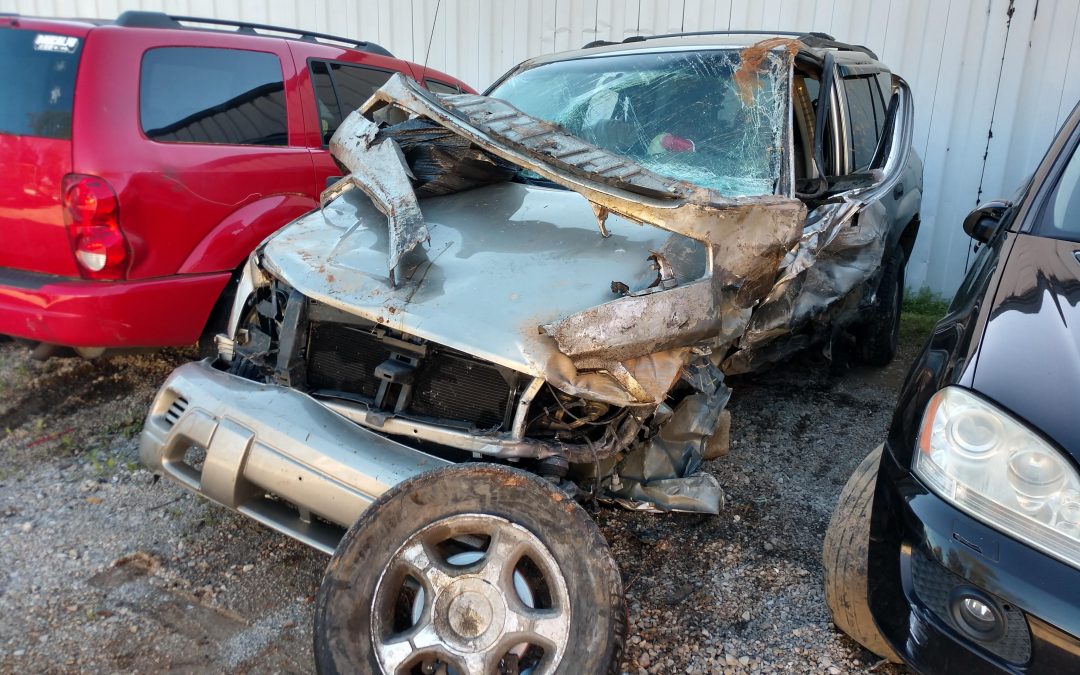 “All of creation will be shaken and removed, so that only unshakable things will remain. Since we are receiving a Kingdom that is unshakable, let us be thankful and please God by worshiping him with holy fear and awe.”  (Hebrews 12:27-29, NLT)

“Do you know where Zach is?”

“He left this morning at 6:00 AM.” I replied, pushing down the feeling of dread creeping up in my chest.

“Well he hasn’t made it in to work yet and we’re worried about him,” he continued.

I called Zach’s phone and a woman’s voice answered, “Is this Zach’s dad?”

“Your son was involved in a car accident this morning. He’s in stable condition. We’ve already done x-rays and we’re sending him back for a CAT scan. The doctor will call you when we know more. You cannot come to visit him.”

And that was it.

The waiting game began. We finally got a call from the doctor at 9:02 AM. He gave us the rundown:

Apparently a car turned in front of Zach and hit him head-on. Zach swerved right at the last instant, throwing his inertia left and witnesses say he was ejected through the driver’s side window on impact. He (and the car) bounced and skidded another 100 feet along the pavement before hitting a curb and flipping onto a grassy embankment.

He shouldn’t be alive.

Miraculously, God spared his life. And after having literally hundreds of people praying for him, he was able to come home 2 days later in a back brace and an arm sling.

On Monday of that week, before any of this had happened, God had impressed me with my next “Word for the Week” blog post.

According to the Oxford Dictionary, the word means, “a belief, feeling, or opinion strongly felt and unable to be changed; unable to be disputed or questioned.”

I had no idea how important that word was going to be for me later that week. With Zach’s accident, the COVID-19 pandemic, the ensuing economic crisis, millions of  workers filing for unemployment, hospitals and staff overwhelmed, and people urged, or mandated, to “shelter at home” I was reminded once again…

This is not our home.

Psalm 91 has special meaning for all of us in this season.

“Those who live in the shelter of the Most High will find rest in the shadow of the Almighty. This I declare about the Lord: He alone is my refuge, my place of safety; he is my God, and I trust him. For he will rescue you from every trap and protect you from deadly disease. He will cover you with his feathers. He will shelter you with his wings. His faithful promises are your armor and protection. Do not be afraid of the terrors of the night, nor the arrow that flies in the day. Do not dread the disease that stalks in darkness, nor the disaster that strikes at midday.” (Psalm 91:1-6, NIV)

The truth is I’m shakable. I’m part of creation. This last week with Zach’s near-death accident has shaken me up pretty good. But I trust in the Lord. And it’s not because I’m super-spiritual or anything. No, far from it. I’m simply childlike. Children trust their Father. In fact, Jesus said a person can’t even enter the Kingdom of Heaven unless they become like a child.

And so while all of creation is being shaken right now, (quite literally in some places with all the earthquakes) I am relying on that which is unshakable. God and His Kingdom. And I’m one of His Kingdom kids!

Most people may not realize this, but the gospel that Jesus preached was not about simply believing in his death, burial, and resurrection, what I call the “Bible Facts About Jesus” gospel. No, when Jesus began His earthly ministry, he began by preaching “the good news of the Kingdom of Heaven.” (Matt. 4, Luke 4, John 3) In other words, Jesus was preaching the gospel long before his death and resurrection. Those events ushered in this eternal Kingdom, but Jesus was telling people to believe in Him and the gospel right now, before any of those things happened.

Here’s why I think that’s important, particularly in these days of suffering and uncertainty. Jesus wasn’t just trying to get people saved, in the sense of only securing their eternal destiny. Jesus wanted them to be saved now, by trusting Him for now, not just for later, after they die. So many of us trust Jesus for our eternal destiny, but we struggle to trust Him in the here and now.  But Jesus was saying that we are part of the eternal Kingdom of Heaven right now, a Kingdom that has no end, a kingdom that is unshakable.

Some day, unless Jesus returns first, the United States of America will cease to exist. It’s a temporary, human, geopolitical kingdom. And if history has taught us anything, no human kingdom lasts forever. They are infinitely shakeable.