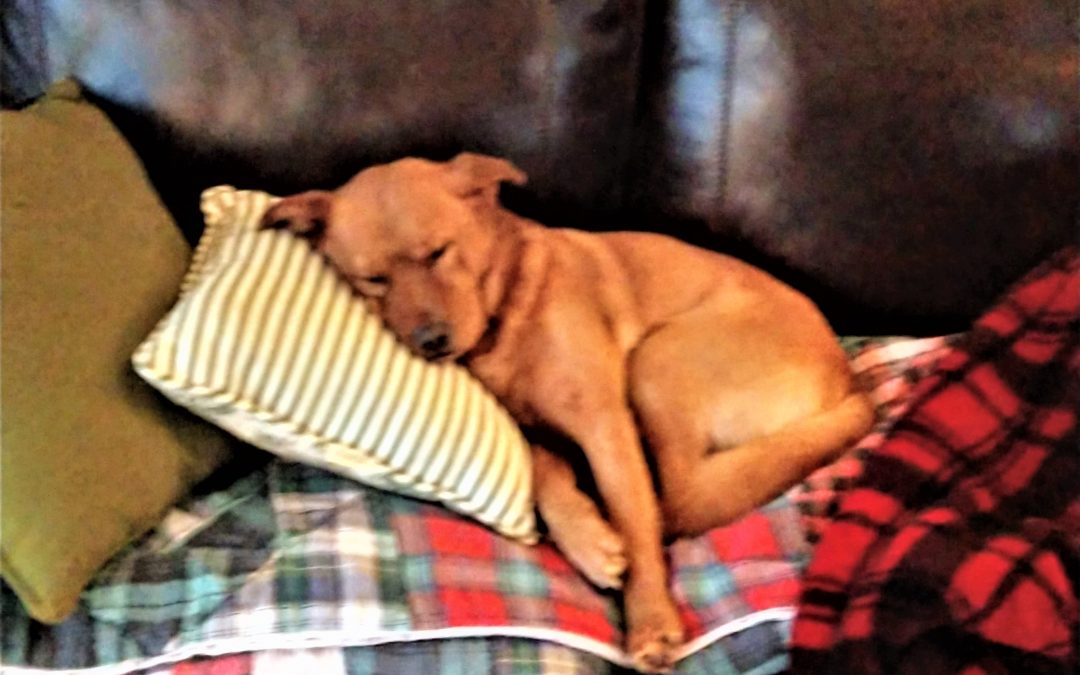 “In repentance and rest is your salvation, in quietness and trust is your strength. (Isaiah 30:15, NIV)

My dog, Dugg, seems largely unfazed by the current crisis in our world. In fact, he sleeps. A lot. It got me thinking about a different way to approach “social distancing.”

It’s the word that came to me earlier this week and I knew my word for the week would be just that.

I’ve been pushing really hard this year, making progress, adjusting my routines so they serve me well, writing 500 words, 5-days a week, sending out a weekly “Word of the Week” blog post, starting a podcast, adding to my workout regimen, and preparing for eight Born 2 Be Wild hikes this Spring. It’s been a great year of progress so far and I’m grateful.

But the big black dog has come to visit and I never really know how long he’s planning to stay. (In case you’re unfamiliar with him, that’s the term Winston Churchill used to describe depression. Ugghh.)

On top of that, the world has changed pretty radically in the last few months. And because of the pandemic, it’s like everything is slowly grinding to a halt. And frankly, I’m pretty tired right now.

I can either fight that. Or choose to rest.

“In repentance and rest is your salvation, in quietness and trust is your strength.”

I’ve always loved those verses from Isaiah, but they seem more fitting than ever in these times. As followers of Jesus, we have a unique opportunity to display a different mode of operation to the world right now. We can model peace and rest.

I want to re-share the story from last week’s post about Jesus and his disciples in a furious storm. “Suddenly a fierce storm came up. Huge waves were breaking against the boat, and it began filling with water. Oddly, Jesus was sleeping at the back of the boat with his head on a cushion. The disciples woke him up, shouting, “Teacher, don’t you care that we’re going to drown?” (Mark 4)

There’s just so much here! We know how the story ends, you know, Jesus calms the storm, asks his disciples what they were afraid of, etc. But I want to spend some time here on what Jesus was doing during the storm (because I think it has a lot to teach us right now.) He was sleeping. What the what?

Now, I don’t think he was unaware of the storm. When you’ve got huge waves tossing a boat around like a rowboat in a hurricane, it’s not something you can miss. Plus the wind noise was deafening, because it takes a lot of wind to make waves big enough to capsize a boat. Still, Jesus was sleeping. How?

Well, number one, he had a pillow. This is essential for good sleep. The same waves that were rocking the boat, were rocking him to sleep. Cushioning is critical.

Number two, he trusted His Father. He knew His life was in the Father’s hands and no one, or no thing, could take His life without Father’s permission. Over and over again, when Jesus was threatened with death or assassination, Scripture would say that “His time had not yet come.” In other words, Someone else determined when it was His time. Not people. Not circumstances.

Number three, he trusted the professionals. He’s in a boat with experienced seamen. If it was the Father’s will they survive the storm, then he was in good hands. No one better to man the ship in a storm than fishermen.

Now here’s where we can take a lesson from Jesus…and Dugg.

Finally, take all of your concerns to God and ask for the help you need. In the middle of the furious storm, the disciples asked the wrong question. They asked, “Don’t you care that we’re drowning here?” Wrong question. Of course he cared for them. Perhaps a better question would have been, “Hey Jesus, how ‘bout you shut down this whole storm thing ‘cause we’re up to our waist in water and we could really use some rest?”

Peter learned that lesson through a lot of storms and reminds us to do the same, “Cast all your anxiety on him because he cares for you.” (1 Peter 5:7, NIV)

Because he cares for you. I love that. So take a deep breath, grab a pillow, and let’s get some much-needed rest.

A good friend, Mark Parsons, shared this on social media this week and it’s worth sharing here:

“And the people stayed home. And read books, and listened, and rested, and exercised, and made art, and played games, and learned new ways of being, and were still. And listened more deeply. Some meditated, some prayed, some danced. Some met their shadows. And the people began to think differently.

“And the people healed. And, in the absence of people living in ignorant, dangerous, mindless, and heartless ways, the earth began to heal.

“And when the danger passed, and the people joined together again, they grieved their losses, and made new choices, and dreamed new images, and created new ways to live and heal the earth fully, as they had been healed.”

We can let the storms of this life rock our world. Or we can choose to trust God and let them rock us to sleep.